I wanted an e-ink screen I could just plug-in. Versatile, big and cheap.
Connection is via a VGA or HDMI. Works like an appliance. All automated. Wireless.

NiLuJe for KUAL and the other wonderful offshoots, heavily used in the project. GeekMaster, who code lives on. As well as JoppyFurr for a simple touch framework. I builidng upon the great work by other people, just a hack to bring it all together. KUAL is fantastic addition to any kindle and GeekMasters video player is very clever. 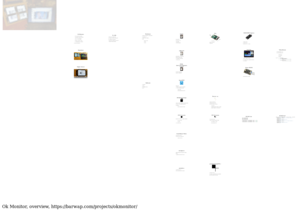 Some of these devices I already had in my own stock. The PI4 is hard, it is possible to make compromises on the compression of the video out and the frame rate to use a earlier model PI.

Only tested on Kindle Paperwhite 1.

The HDMI to USB Capture is connected to a PI4. On the PI4 this stream is either split into four by ffmpeg in to raw video. This is then encoded using based upon geekmaster's video encoder/player for the kindle. As the PI 4 is running OpenWRT operating system, the kindles connect via wifi direct to the PI 4, on a standalone network.

The video encoding is resource intensive, four cores of the PI to each run 1/4 of the screen.

Netcat streams (video dedicated wifi network), to the kindle(s), which is them written direct to the frame buffer. Over the top of an app that either shutdowns when top left corder of screen pressed or does a full refresh when pressed to eliminate ghosting on the eink screen.

How To Set Up

Each step has instructions in the subpage.